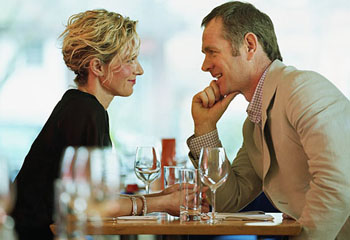 Actions speak louder than words. A guy would say one thing, but his body will tell you another. Body language is a subconscious way of giving himself away.

If you are confused and still trying to figure out whether or not a guy or woman is interested in you, then it is best to check out this list of positive and negative body language. If a guy or woman does more good body signs than bad signs, then there is a possibility that he or she is attracted to you.

However, it is best to be careful in doing and interpreting body language. Not everyone is comfortable with intimate body movements like being too close or touching his arm. For instance, if you lean too close to a guy, he might think you are overly aggressive or invading his space. In case he becomes uneasy about it, apologize and put an ample distance between the two of you. At least that would give him a signal that you are sincere and caring.

He has good eye contact – Looking at another guy’s eyes is one of the easiest ways to check if he is interested in you. If his eyes look friendly and show sincerity to you, then getting along with him won’t be much of a problem.

He twirls his hair – You may think it’s a girl thing, but combing his hair (especially above the ear) using his fingers is a sign of attraction. If he tries to twirl your hair gently, then let him do so.

His smile is wide open – You cannot fake a good smile. If the guy smiles widely, even showing the laugh lines or crow’s feet if the guy’s a bit more mature, then he has genuine fascination or attraction for you. Some guys would even smile to show their dimples.

He would gently touch his face, cheeks, or lips – Sometimes, a guy would touch his face, especially his lips, to show interest and attraction. Some would even interpret this as a sexy way for the guy to imagine how good would you be if you kiss him on the lips.

He would touch you – A guy would try to touch your arm or shoulder to show his desire and attraction to you, and at the same time he tries to test how you would respond. If he touches your shoulder, try touching his waist or his shoulder. You could also try holding his hand that is touching your elbow.

He would roll-up his sleeves and unbutton his shirt or jacket – He begins to feel comfortable to you, or you can say that he is trying to let off some steam after seeing you.

He has that piercing eye contact – If he stares at you and you feel creepy about it, then it would be best not to continue your date.

He tends to look away – This may show insincerity on his part, or probably he may just be shy. Some guys may follow certain cultures about not staring too much at another person while conversing.

He constantly looks around while you’re talking – This is a sure sign that is disinterested towards you, even to a point that he looks around for other hot guys or a means to end the date quickly.

He clenches his jaw – If he shuts his jaw tightly, and you can tell from his gnashing teeth or his pursed lips, then he is become impatient towards you and the date.

He nods way too much while you’re talking – He is probably not listening to what you are saying. However, you can also say that he may have a short attention span. You can gauge it by asking him about his thoughts.

He crosses his arms or legs – Crossing arms is a sign of being defensive. This simply means that he is not yet open towards you. But that doesn’t necessarily mean that he doesn’t like you. Maybe he wouldn’t cross his arm after several dates.

He would shove his hands in his pockets – Like crossing arms, this is also a sign of being defensive. However, it can also mean that he is not interested about the date.

He firmly puts his finger on his chin or lips – Doing so is an indication that he is evaluating or criticizing you in his thoughts.

He puts out a thin, forced smile – As said before, smiling cannot be faked. Even if he smiles at you, as long as it is insincere, his smile would look thin and forced.

He would drums the table using his fingers – He is simply disinterested with the the date and with what you are saying.

He would rub the back of his neck – If he shows moves like this then it means the guy is tired. He could either be tired from the work that he had before the date, or he could be tired because of the date.

He constantly plays with his lighter or pen – He could either be bored or nervous about the date. Try asking him about his interests to loosen him up.

If she makes direct, steady eye contact, she’s interested. (You may be able to stir her on with a few lingering gazes of your own, but don’t overdo it – staring will just make her uncomfortable, especially if you forget where her eyes are.)

If she leans in close to you, she’s attracted. And if she gets close enough to whisper in your ear, she’s really saying that she wants to be even closer.

But if you can see both rows of teeth when she smiles, she’s genuinely happy to be with you.

If her palms are open, it shows sincerity and receptivity – she isn’t hiding anything from you.         If she tilts her head, she’s creating an affectionate gaze that shows her interest.

If she tosses or touches her hair, this is classic «preening» behavior and is clearly flirtatious in a social setting.

If she lifts her hair off her neck and stretches, baring her neck, she’s displaying submissive behavior that leaves her vulnerable to you – a telltale sign of attraction.

If her legs are crossed in your directions, she’s inviting you to stay put.

If she blushes, she’s nervous, excited and possibly quite attracted to you.

If she moistens her lips with the tip of her tongue, that’s a very good thing. If she applies lipstick in your presence, that’s even better.

If she touches your arm, even very casually, that’s a very good sign. Even if she touches everybody that way, this signal may not mean she’s crazy about you, but she certainly isn’t repulsed by you.

If she touches any other part of your body, she definitely wants to get to know you better.

If she seems generally tense, ask her nicely if she’s had a bad day. If she hasn’t, it’s you. Now is the time to get her to laugh, ask her to dance or at least have another drink before she leaves.

If she seems generally relaxed, you’re doing fine – she’s enjoying being with you and is open to future possibilities. If you keep doing what you’ve been doing, she’ll be putty in your hands.

If she leans away from you, she’s distancing herself from what you’re talking about – or from you. Change your approach immediately.

If she smiles with her mouth but not her eyes, it’s likely that she’s just trying to be polite.

If her fists are closed or clenched, she’s angry or she’s protecting herself from you (or she’s about to take a swing at you).

If she taps or drums her fingers, she’s bored, impatient or annoyed.

If she hides her face with her hand or a menu, she’s protecting herself from you, or she’s keeping something from you.

If her hand is over her mouth, she disapproves of you or is reluctant to say what’s on her mind.

If her hand is on her cheek, she’s still evaluating the situation.

If her arms are crossed, she’s defensive and guarded.

How To Enjoy Speed Dating: 4 Essential Tips For Women

Questions You Should and Shouldn’t Ask to Start a Conversation