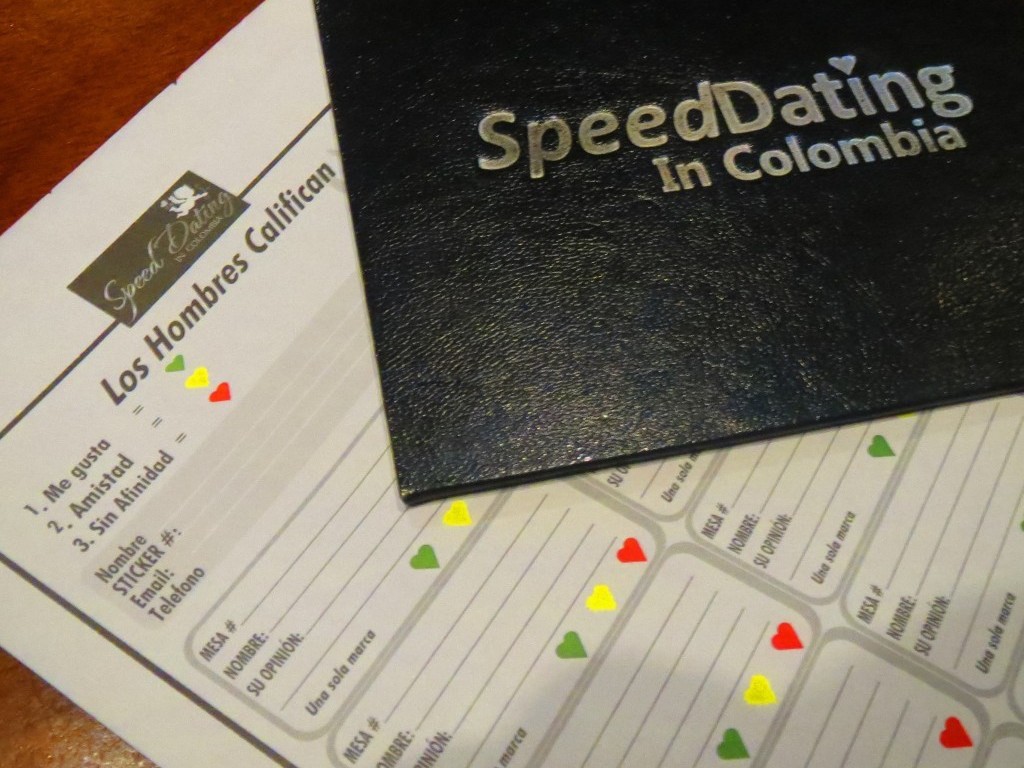 They do it almost everywhere in the United States, and it seems like fun. A friend did it when I was living in Fort Myers and while she didn’t find her future husband through speed dating, she made lasting friends.

That’s why Speed Dating in Colombia got my attention. I was curious if it could work in a more conservative culture.

The founder, Jason, not surprisingly, is American and he seems to have a good structure to his business, which has led to several weddings.

Speed Dating in Colombia is based in Bogotá but is exploring opportunities in Medellín, such as the upcoming event on Feb. 14, Valentine’s Day in the states. (More on that later.)

You sign up online, where you pay 60,000 pesos ($25) to take part. That gets you a free drink when you arrive, either a Cuba libre, mojito or margarita, or a beer if you’d prefer something less sugary.

If you’re thinking that’s too expensive, hold on one second. The price is intentional. Jason wants to draw professionals to his events and the cost helps ensure that, something I eventually learned and will explain later.

Everyone writes their name and email on a small sheet of paper (pictured above and in the feature photo), and the women pick a table, each of which has a number.

Then the guys pick where they want to start and have five minutes at each table to get to know someone as best they can. After the five minutes are up, Jason’s beautiful hostess Nidia will ring a bell and let people know it’s time to move on.

On that sheet of paper you write a characteristic that will remind you who that person is. Maybe their hair color, what they were wearing maybe, maybe something they said to you. Whatever works is fine.

You also pick compatibility options. If you like the person as more than a friend, you mark the green heart. For just a friend, the yellow heart. If you don’t like them at all, the red heart.

Two people at Speed Dating in Colombia, enjoying a conversation

I participated last month, just to try it out. Jason told me almost everyone used “gringo” to describe me, as I was the only foreigner who participated. I laughed.

I did meet some interesting women, everything from nurses to computer systems engineers to a consultant at the Spanish embassy.

There were a dozen couples at that event, and Jason said he has had up to 40 at his best ones. I believe him. Bogotá is a big city where people are always so busy, so business-minded. They don’t always have time to meet other people, for a social life.

The culture centers on social life and it’s a slower pace of life. There’s still a bit of a small-town mentality there as well so the price might deter some. As my first paisa friend ever says, “We’re not a big city. We’re a big town.”

Fair enough, but Medellín is becoming more international every year and I think it might be about the right time to unveil something as progressive as Speed Dating in Colombia.

I guess we’ll find out at 8 p.m. on Saturday, Feb. 14, at a place to be determined, probably Calle Ocho, a classy new restaurant in Poblado with delicious tapas.

You can sign up for the upcoming event in Medellin that we have scheduled for Saturday February 14, 2015 at 8:00 in Calle Ocho Restaurante with the following link: http://speeddatingincolombia.com/speed-dating-citas…/